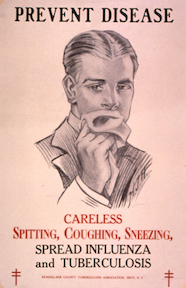 Tuberculosis has claimed its victims throughout much of known human history. It reached epidemic proportions in Europe and North America during the 18th and 19th centuries, earning the sobriquet, “Captain Among these Men of Death.” Then it began to decline. Understanding of the pathogenesis of tuberculosis began with the work of Théophile Laennec at the beginning of the 19th century and was further advanced by the demonstration of the transmissibility of Mycobacterium tuberculosis infection by Jean-Antoine Villemin in 1865 and the identification of the tubercle bacillus as the etiologic agent by Robert Koch in 1882. Clemens von Pirquet developed the tuberculin skin test in 1907 and 3 years later used it to demonstrate latent tuberculous infection in asymptomatic children. In the late 19th and early 20th centuries sanatoria developed for the treatment of patients with tuberculosis. The rest provided there was supplemented with pulmonary collapse procedures designed to rest infected parts of lungs and to close cavities. Public Health measures to combat the spread of tuberculosis emerged following the discovery of its bacterial cause. BCG vaccination was widely employed following World War I. The modern era of tuberculosis treatment and control was heralded by the discovery of streptomycin in 1944 and isoniazid in 1952.