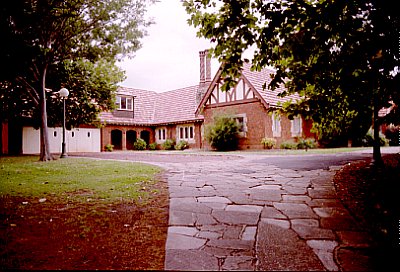 Early HistoryThe University acknowledges that Gleniffer Brae is located on the traditional land of the Wadi Wadi people who speak the Dharawal language, and that these people have a deep and abiding relationship to this country and are the traditional custodians of this land.After the arrival of Europeans in the Illawarra, much of the land was used for farming. In 1841, Robert and Charles Campbell received a Crown grant of 1000 acres which included the site of Gleniffer Brae. In 1901, James Fitzgerald acquired the land and it became a dairy farm until his death in 1925. The family eventually sold 75 acres of the land to the Hoskins in 1938.The Hoskins FamilyArthur Sidney Hoskins moved to Wollongong after he and his brother, Cecil, established the steelworks in Port Kembla. During their time in Wollongong they made a substantial contribution to the Region.Cecil and Sidney had married two sisters, Dorothy and Helen (known as Madge), who were the daughters of the stonemason Thomas Loveridge. The sisters’ brother, Geoffrey Loveridge, was an architect and designed Cecil and Dorothy’s home called Invergowrie at Exeter in the Southern Highlands.The Design and Building of Gleniffer BraeSidney and Madge purchased 75 acres of the Fitzgerald’s dairy farm in Keiraville and also employed Geoffrey to design their home, a single-storey English Tudor or Elizabethan Revival style house.Construction of the house began in 1937 and finished in 1939. The name Gleniffer Brae came from Madge’s grandfather’s house, near Bowral, which was also called Gleniffer Brae. The name originally came from a range of hills in Paisley, Scotland where he was born.As at Invergowrie, Paul Sorensen, the famous landscape architect from the Blue Mountains, was employed to design the gardens. The collaboration between Loveridge and Sorensen is a distinctive feature of the overall aesthetics. History of Gleniffer Brae